Worries of a looming economic downturn have investors feeling uneasy, but the future is yet to be written.

The word recession has been top-of-mind as we head into 2023, leaving some investors feeling uneasy at the end of this year. Recession concerns have increased recently in light of growing economic uncertainty regarding the Federal Reserve’s aggressive fight against inflation.

The Fed is increasing interest rates with the intent of slowing economic activity to ease the rapid price increases that plagued the economy in 2022. But some fear it might go too far in its efforts and send the economy into a recession. Since the stock market tends to respond unfavorably in the short-term when recessions occur, investors are understandably concerned.

But how do we know if we’re headed for a recession? And, importantly, how much does the word recession really matter?

The official job of determining whether a recession exists belongs to a group of economists at the National Bureau of Economic Research (NBER). The NBER’s guideline states that “a recession is a significant decline in economic activity that is spread across the economy and lasts more than a few months.” It’s a surprisingly subjective definition for a group that prides itself on objectivity.

The phrase “significant decline in economic activity” really refers to a drop in spending on goods and services. This typically leads businesses to cut back on expenses, which means cuts in pay or payrolls, which leads to less income for workers and less money for future spending, and so on. A pattern like this can quickly turn into a vicious cycle, which is why recessions are painful.

In order to make the call about whether a decline meets the standard of a recession, the NBER looks at more than just GDP, which has traditionally been the primary gauge of economic activity. Additional factors like personal income, consumer spending, job creation, and unemployment levels all play a key role in helping the NBER determine whether a recession exists.

Right now, GDP shows the economy has actually been growing at a steady clip–economists even went back and revised last quarter’s numbers higher after new information showed growth had been stronger than initial estimates. Real income and consumer spending have been moderate, while the labor market is strong.

Yet even with signs of strength, many feel the economy is still headed for a downturn. So, will we see a recession in 2023? It’s hard to say. Predicting recessions has been notoriously difficult, and few have done it with any reliable success.

Despite the challenges in forecasting economic growth, members of the Fed do publish their own projections. These forecasts hardly provide a crystal ball, but they present a helpful guideline for thinking about the future.

The chart below shows three possible scenarios for economic growth in the coming years, along with how the economy has performed in the recent past. The dark green line represents actual measurements of economic activity through the third quarter of 2022, while the other colors show three estimates for the future based on forecast data shared by the Fed. The calendar year 2023 is shaded for emphasis. 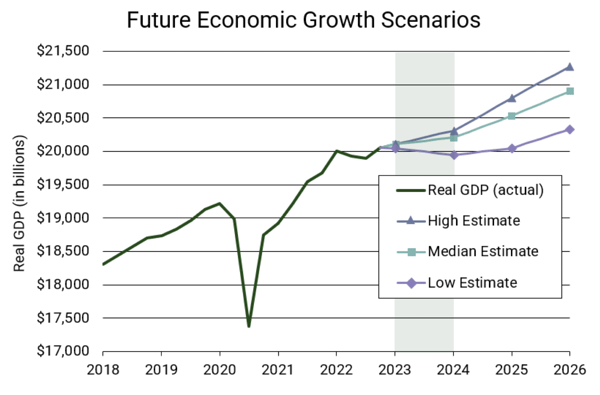 Notice that none of the projected growth scenarios for 2023 are remarkably rosy, but none are devastating either. And from 2024 onward, all three scenarios show the economy resuming a healthy rate of growth.

Again, forecasting the future of the economy has proven to be a real challenge. The economist John Kenneth Galbraith famously said, “There are two kinds of forecasters: those who don’t know, and those who don’t know they don’t know.” While these estimates don’t foretell the future, they do provide a helpful framework for thinking about what might be in store for the economy.

Recession or not, investors right now are wise to remind themselves of their investment goals in the context of the long-term pattern of growth and the future potential of capital markets. Time and again, sticking to an investment plan and committing to markets has been the best way to weather economic storms. 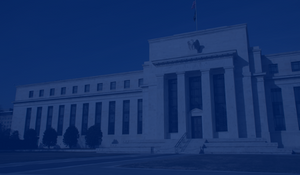 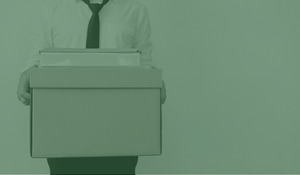